Cooperation between ALDI Suisse and cyber-Wear 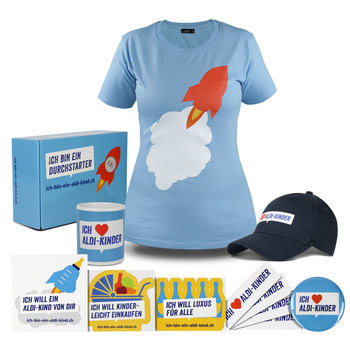 With its "ALDI kid" mission the discounter ALDI Suisse has launched an extensive multi-channel campaign aimed at children and intended to challenge competitors such as Coop and Migros on the highly competitive Swiss grocery market. In the campaign ALDI's youngest customers are displayed as bright, intelligent, modest, confident and environmentally conscious. The campaign by Scholz & Friends Neumarkt was developed in cooperation with JWT Zürich for TV, out of home, print media, the point of sale and digital channels.

The role of cyber-Wear was to provide 3000 starter kits in the three languages spoken in Switzerland. Each kit contains a T-shirt and a cap, a button and a number of stickers in the campaign design. With these classical fan articles the aim is for the "ALDI kids" to generate attention for the campaign and at the same time get them to think of themselves as cool, clever discounter customers. The parcels with labelling in German, French and Italian were delivered by cyber-Wear to three ALDI Suisse warehouses.