Even more fun in the Ford Lifestyle Collection web shop 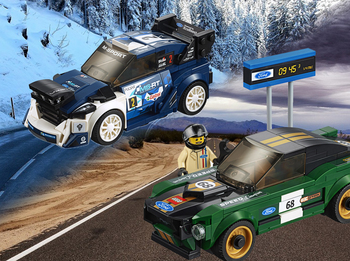 Ford and LEGO® fans have had to wait a whole year for this: From March, two new building sets from the successful LEGO® range will be available in the Ford Lifestyle Collection web shop, thereby bringing popular cult cars of the brand into children's playroom. Those young hearts will probably beat just as fast as their motorsport-loving mums and dads. With the high-horse power Ford Fiesta M-Sport WRC and the cult Ford Mustang Fastback, rally fans are sure to get their money's worth.

Ford's iconic classic, the Ford Mustang Fastback, has now been immortalised in small blocks. With a little bit of patience and dexterity, you can create a small green and gold gem from the 183-piece set. Fans will be amazed by the attention to detail, including the double stripes on the bonnet, sports racing stickers and the removable windscreen. The supplied mini racing driver, in an authentic racing suit, also can't wait to shoot off. And if you want to build even more LEGO®, the set also includes a pit board.

With the LEGO® Ford Fiesta M-Sport WRC the tempo gets even higher. Thanks to the freedom given to the engineers, the British team of specialists at M-Sport creates spectacular competition vehicles. Based on the successful best-selling small car - the Fiesta - the Ford Fiesta WRC won the 2017 World Rally Championships early. The buildable mini version even has a replaceable special hood, so that it can drive in the dark.  Fans can now recreate the legend, win their own rallies and leave their rivals behind in a cloud of smoke.

The models have beendeveloped specifically for children, as well as for adult fans. LEGO® is an integral part of a happy childhood, and has been for quite a long time. Thanks to its legendary building blocks, the Danish company of the same name has become the world's biggest toy manufacturer. Even childless households are starting to buy LEGO®, ever since the STAR WARS sets came out.

The Ford building sets are available at http://bit.ly/Ford_Lifestyle_Collection_Lego