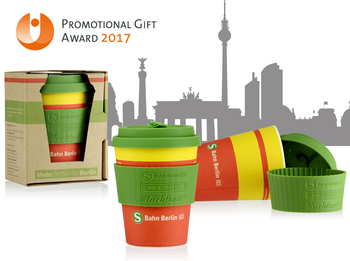 The environmentally friendly alternative to the paper coffee mug, realised by cyber-Wear on behalf of Deutsche Bahn, is a gain when it comes to waste prevention, and a real winner too: The reusable coffee-to-go bamboo beaker, produced for the Berlin S-Bahn local railway promotional campaign "My beaker for Berlin", has received the Promotional Gift Award 2017. A sustainable solution to a huge environmental pollution problem - around half a million paper cups are used for a few minutes every day in Berlin alone and thrown away - cyber-Wear´s bamboo beaker, based on a design from Serviceplan Berlin GmbH & Co. KG, won in the "Best Practice" category.

As part of the local public transport system, the Berlin S-Bahn stands for environmentally friendly mobility in the capital city. In order to counteract another highly visible problem of environmental pollution, the Deutsche Bahn subsidiary, with the support of cyber-Wear – launched a campaign against the mountains of waste produced by disposable coffee beakers in autumn 2016. A coffee-to-go is handed out 460,000 times daily in Berlin, creating the same number of thrown away disposal paper beakers. For the Berlin conurbation alone this amounts to around 170 million containers annually! A large part of this enormous amount of environmentally burdensome refuse ends up in waste bins in S-Bahn trains and stations.

Together with supermarket chains Bio Company and Marktzeit, the Berlin S-Bahn kicked off the "My beaker for Berlin" campaign, commissioning cyber-Wear with the production of sustainable coffee cups in the S-Bahn brand design. The order was for 13,000 cups made of certified organic bamboo fibre, made with a minimum energy input. By purchasing the reusable so-called Ecoffee Cup, guests travelling on the Berlin S-Bahn support the "Urban trees for Berlin" project and get up to euro 0.20 discount on hot beverages at both cooperating supermarket chains. The Promotional Gift Awards specialist jury found it to be an excellent idea, successfully executed!

The Promotional Gift Award is given once yearly in eight categories. It is organised by the Cologne publishing house WA Media GmbH, organiser of the HAPTICA® live trade fair and publisher of the trade magazines HAPTICA®, Promotion Products, Werbeartikel Nachrichten and eppi magazine. The award is regarded as a seal of creativity in the promotional gift industry and sets new benchmarks in haptic advertising.